I am happy to share a fun project I put together this weekend - a new R package called dundermifflin. If you can’t guess from the name, it will give you quotes from the Office whenever you want! This package was inspired by the goodshirt package, which gives users quotes from The Good Place, I was able to great a similar package for the Office. By using theOffice-api, I created a data set, office_quotes, that is shipped with the package, that has every line from the Office, with the exception of season 5.

I will try to keep this brief, because as in the words of Kevin:

So let’s dive right in!

To install the packages you can use remotes::install_github:

The implementation of this package is pretty straight forward. There main function of this package is get_quote and this will return a random quote from any season and episode in the show. By default the quotes are required to have a minimum of 10 words and a maximum of 100. This is to try to remove some of the meaningless lines from the show, but it will likely also miss some of the great one-liners. See the Next Steps section for how I hope to deal with this! This function also allows you to specify the season, episode number, episode name, scene number, or character name to narrow down the quotes you get. By default, only quotes by characters that are apart of the main office staff are included. Let’s see how it works.

By default, get_quote and all the other function variants, to be discussed in later sections, return an object of class dunder. This is just a tbl with info for one quote. This object can be passed to as.character and then used in conjunction with cowsay::say.

While you can specify the character you wish to receive quotes from in the get_quote function. There are also functions for all of the main characters! Sorry if I missed any, but:

The character functions are super straightforward. Any of the arguments, except character, for get_quote can be passed to them. Here are some examples:

You can also get quotes for entire departments.

That’s what she said

This one might be a little more taboo, but since it is a memorable running joke of the show, I created a function she_said that returns a random “That’s what she said” joke from the office. This function will return the line before the joke and the line with the joke.

Start your day (read: R session) with the Office

You can also add these functions to your .Rprofile so that you start every new R session with a quote from the office! 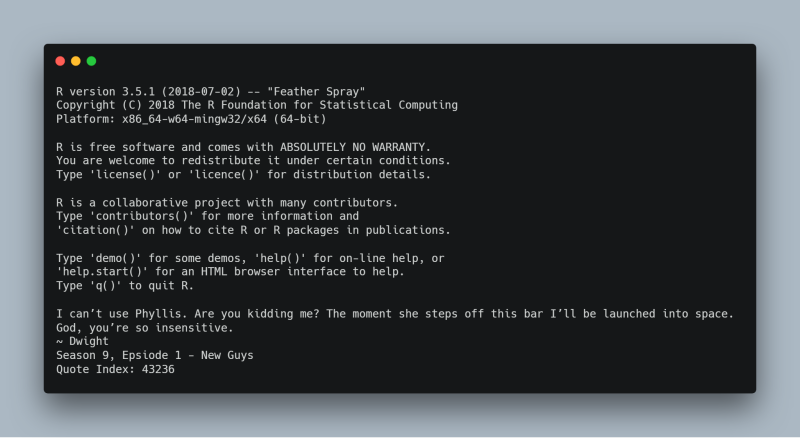 Currently, these functions will return a random quote from the entire show script that meet certain length requirements. While a lot of them are hysterical (I have run the function a lot and enjoyed it immensely), you will certainly get some quotes that are not. Something I would like to do is create a separate data set that contains specific quotes that I (and you!) find especially funny, and you can help!. There is an argument in the get_quote function, idx, that can be set to TRUE that will return the “Quote Index”. What you can do is use this argument and submit the quote, along with the index, to this github issue as a comment. I will work periodically to add all of the funny ones to a new data set that will provide users with a more curated quote output to make sure you are always getting the funniest quotes possible!